email your photos to – admin@ sparkmanhightrack.com

The team’s next meet is the Chickasaw Trails Invitational on Saturday, September 10th. 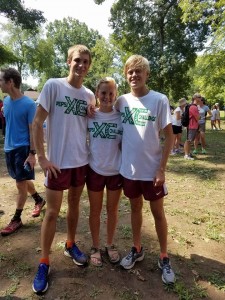 Six members of the team placed in top 15 in their respective events.
Senior Hailey Brown turned in very respective 11th in the Varsity Girl’s 5K.
Seniors Jake Russell and Harrison Miller led the Varsity Boys to an overall 5th place team finish by placing 4th and 5th in their event.
Freshman Elisa Jones’ season started with a visit to the podium finishing 11th in the Girl’s JV 2 miler.
Monrovia Middle School 8th grader Austin Al’Dijaili and Freshman Matthew Livingston finished 10th and 13th leading the JV boys to a 3rd place finish in their race. It was a great showing for the Thomas’ brothers, Sophomore Adam and Freshman Isaac , both set Personal Records today.
Congratulations Senators!

CONGRATULATIONS to our Sparkman qualifiers for this year’s State Indoor Track Meet!
For the Girls –

Record Result at the Regional Qualifier!

Congratulations to all of our Sparkman Cross Country Team runners on their performances in the Regional Qualifying meet.

We had individual State Qualifiers, A NEW SPARKMAN BOYS RECORD, a Boys Team finish of 3rd and for the first time in 16 years … our Sparkman Boys qualified a TEAM for State!

For the girls, Junior Hailey Brown not only PR’d in the 5k, she made the “All Section Team” and individually qualified to compete at State!!!
Also setting new “personal record” times in the 5k were, Soph. Makayla Tomaino, 7th grader Baily Wallace and Sr. Kaitlyn Williams.

For the Boys team It was Senior Seth Graham leading the way! Seth took an Individual 2nd PLACE, made the “All Section Team” and set a NEW SPARKMAN BOYS RECORD in the 5k distance! That’s the way to leave your mark as a Senior!

Also making the “All Section Team” was Jr. Harrison Miller who finished 10th with a new PR time!

We had another 4 Senators finish with PR times in the 5k Distance.
These were – Sr. Bailey Herfurth, Soph. Jake Maier, Fresh. Shafi Muhammad and Monrovia Middle 7th grader Austin Al-Dajaili.

While we have had several, State Qualifying runners over the past few years, to qualify as a team you must have at least 5, top point scoring runners in the event. We had 5 PLUS two more alternates.

It’s been a GREAT season for all our CC runners and we look foreword to seeing our Senators compete at STATE!

The Team Motto: I don’t stop when I’m tired, I quit when I’m done!! GO SENATORS!!

On Saturday the Senator’s Cross Country team competed in the St. Bernard’s Oktoberfest Invitational in Cullman.

Though the course was the same as in the past, the race directors reversed the direction putting tougher hills towards the end of the race. But that didn’t stop many of our runners from shaving up to three minutes off their times from last year.

The Varsity Boys team finished an amazing third out of 18 teams to bring home another trophy. Placing in the 5K event were Seniors Seth Graham (8th), Bailey Herfurth (22nd) and Junior Jake Russell (9th). Setting PRs for the distance were Sophomores Jake Maier and Chris Meininger.

The Varsity Girl placers were Junior Hailey Brown (19th) and Sophomore Makayla Tomaino (23rd), both girls cutting about two minutes off their time from last year.

The Junior Varsity Boys finished fourth out of eight teams. Placing in the 2 mile event where Freshmen Kyler Waters (13th) and Hanif Muhammad (20th), who set a Personal Record for the distance.

Come out Tuesday afternoon to John Hunt Park to cheer on the team, first race is at 3:00.

The Senator’s Cross Country team competed Tuesday in the Randolph Cross Country Classic at UAH. This meet is a favorite of runners and is called the “mud run”. Again Sparkman had some great times with 16 runners setting person records and six placing for awards.
–The JV boys team place FIFTH out of 21 teams with Freshman John-David Ray leading the way with a PR and fourth place finish, Freshman Shafi Muhammad placed 13th also setting a PR for the distance. Other PRs were set by Freshman Hanif Muhammad and Riley Edwards and MMS 8th graders Hayden Miller and Ryan Wilson.

—Varsity girls were led by Junior Hailey Brown in 13th giving her a new PR. Sophomore Makayla Tomaino also recorded a new PR at the event. Congrats Senators on a job well done!!!

On Saturday, Sparkman’s Cross Country Team competed in the Chickasaw Trails Invitational, the largest meet the team participates in during the season with 100 teams registered.

Another Win for Sparkman Cross Country!

The Sparkman XC Team continued to shine with their STRONG performance at the Warriors Invitational  in Florence.

Varsity Boys finished in 1st PLACE led by Sr. Seth Graham who scored an individual 1st PLACE FINISH.
Jr. Jake​ R​ussell was hot on Seth’s heals with a 5th place finish and finishing just outside the top 10, in a field of 150 runners, was Jr. Harrison Miller in 11th and Sr. Bailey Herfurth in 12th.

JV Boys were also showing their strength with a 2nd Place Finish!
Sparkman was again represented strongly in the top finishers with (7th) Austin Al-Dijaili finishing in 3rd Place! Less than 6 seconds behind him on this 3200m course was Fresh. Shafi Muhammad who earned himself 4th Place. Rounding out the top 10 was Fresh. Isaiah Vasquez and not far behind him was (8th) Omar Myers in 12th. 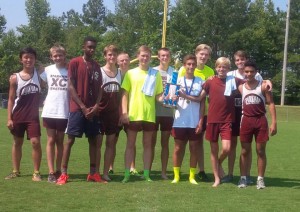 Our Varsity Girls finished with a team, 8th place with our top finisher being Jr. Hailey Brown followed Soph. Makayla Tomaino  just 6 seconds behind her!

First XC meet today at Sharon Johnston Park and the Senators came out to win.

Next Page »
Press f for fullscreen.