Our official Track season wrapped up with an Awards Ceremony and cookout on May 8th.
It was a chance to show our appreciation to our hard working and dedicated Track Coaches and to recognize our athletes for their accomplishments this past season.

In the State Decathlon we had Rob Russell and 5th place finisher, Ben Dailey.
In the Heptathlon we had Briannca Trammell and Kelsey Johnson.

Qualifying for the State Track Meet were Myles Johnson in the 300m hurdles and Ben Dailey in the 110m Hurdles, Polevault AND Javelin.
Women’s qualifiers were Gabrielle Griner in the Polevault, Kelsey Johnson 100m Hurdles, Briannca Trammell 100m Hurdles and Cicely Seldon in Discus Throw. 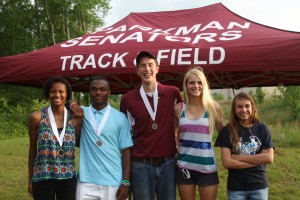 The “Runner’s Award” was given to Kelsey Johnson.

“Most Improved Athlete” Awards were given to boys Rob Russell and Anthony Parameswaran and for the girls, Gabrielle Griner and Kelsey Johnson.

“Most Valuable Runner” was given to Briannca Trammell who scored a total of 58.5 varsity points for the girls team this season (2nd was State Qualifier, Gabrielle Griner with 38pts) and for the boys, Ben Dailey. Ben scored a whopping 126pts varsity points this season! To put that in perspective, our 2nd highest scorer for the men was State Qualifier, Myles Johnson with 29pts.

The Coaches’ Award went to Kelsey Johnson and Montel Troupe.

Finally, we got a chance to recognize all of our Graduating Seniors. 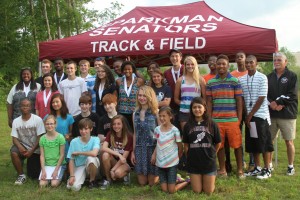