The first day of the Metro Championship proved to be a bit wet, but this didn’t dampen the performance of our athletes.

Jr – Kai Perkins stepped up and had a PR throw in the Discus! Her winning throw of 93′ 6″ went nearly 4 feet further than her nearest competitor.

Jr – Rob Russell is back from injury and showed it to his competitors in a BIG way! Rob won the Pole Vault with a jump of 12′ 6″ he then went on to set a NEW SCHOOL RECORD with a jump of 13 feet! 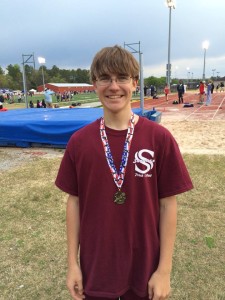 Fresh – Jake Russell finished closely behind Bailey with a 10th in the 1600m.

Jr – Kelsey Johnson returns from last Saturday’s injury, to capture a qualifying spot for the finals of the 100m Hurdles. Those finals will be Thursday.

At the end of day one, our Girls Team is in 8th and the Boys team is in 4th.