The year has certainly gotten off to a great start!
This Saturday’s Fairview Invitational proved another chance for our Sparkman Runners to shine. 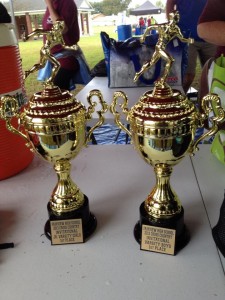 (complete SHS results and scoring can be found by clicking here)

Clearly the Highlite is the FIRST PLACE TEAM finishes for the JV Girls and Varsity Boys but you can’t overlook the individual performances that got us there. These include SEVEN top 10 finishes (with a third and a FIRST), 15 NEW PR’s and a NEW SCHOOL RECORD!

It’s exciting to think where this season may go if we can continue to build on these PR’s!

Noteable –
On the Girls JV team, 8th graders Savanah Wilson and Renita Vander Schaaf both had NEW PR’s and Renita’s was good for an individual FIRST PLACE finish!

The Boys JV finished just outside the a podium position. 9th grader Steven Underwood set a NEW PR as he finished 10th leading the JV squad to a Team, 4th place finish.

The Varsity Girls put in a good showing as well but with only 4 girls entered, they did not qualify for team scoring. None the less, all 4 of our girls set NEW PR’s for the 5k distance and front runner Kelsey Johnson finished with an individual 5th!

The Varsity Boys were on fire!
All 9 of our SHS runners entered in this event set NEW PRs with Bailey Herfurth, bailey placing 9th, Jake Russell placing 7th and Anthony Parameswaran taking 3rd place and setting a NEW SPARKMAN RECORD in for the 5k distance.