Congratulations to all of our Senator Track Team members who competed at state this year.

For some it was not quite the season ending they were hoping for and for others it spoke highly of meets to come!

At sectionals, Senior Myles Johnson was a surprise qualifier in the boys 300m Hurdles. He had dropped nearly 2 seconds off of his PR to make the state meet and setting a NEW Sparkman High Men’s record in that event! He was unable to improve on that mark at state but still managed to run his 2nd fastest time ever in 300m H.

Ben Dailey
had qualified for an amazing 3 events at state but was unable to improve on any of his marks. The 12th grader has had a phenomenal season, scoring 3 times as many points as his next highest scoring team mate and setting THREE new Sparkman Men’s records. As he gradulates, he leaves behind an amazing FIVE school records with his name on them … and he may not be fished yet! Next week he will be competing in the State High School Decathlon.

12 grader Brianca Trammell has also had an amazing season.
In the girls 100m hurdles, she finished in point scoring position in every meet she entered and had FIVE podium finishes. She also finished in the points 3 times in the 300m Hurdles this season and in her one try at the long jump she finished 5th!
At the State meet she turned in her 2nd best time ever for the 100m H which scored her 14th out of the 24 competitors.
She leaves Sparkman owning the Indoor Track, School record for the 60m Hurdles.

Kelsey Johnson was another surprise qualifier to the State Meet… but maybe it shouldn’t have been much of a surprise. In the Girls 100m Hurdles she had 5 point scoring finishes in 6 races and 3 of those finishes put her on the podium!
At the state meet she finished 15th of 24 and set a brand new PR time for herself. Kelsey, who also currently ownes the Sparkman record in the Girls Triple Jump and the Three mile run is just a 10th grader so we can look forward to seeing even better marks from her over the next two years.

Gabrielle Griner hasn’t made it to Sparkman yet but is already leaving her mark. The Monrovia Middle School 8th grader finished in the points in every meet she Pole Vaulted in this year and finished on the podium 4 times. She won the Vestavia Hills “King of the Mountain Invitational” – MS Pole Vault, setting a new MEET RECORD by nearly a foot and she won the North Alabama, Jr. High Championships for the second year in a row. She qualified well at this years sectionals and at the State Meet she finished 9th of 24 vaulters, just one spot out of the points. Her vault of 9′ 6″ was a new PR and Sparkman Girls Pole vault Record! 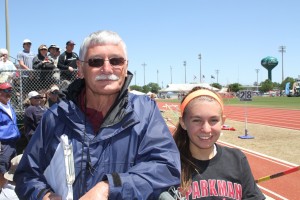 Coach Gover and Gabrielle at the State Meet.