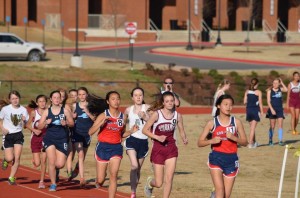 There are a lot of way’s to evaluate a Track Season. Things like team finishes and trophies, individual medals and points. Since the ultimate goal of having a JV team though, is to be developing the next generation of Varsity level Track & Field athletes, the best  measure of the season might be things like performance in practices, P.R’s, number of starts out of the blocks, experience with getting cut-off in a distance race or making that clutch throw on a last attempted. All things that help develop you as an athlete.

That being said, the typical way of evaluating Varsity performance is compare the points each athlete has scored for the team. So just for fun, here is the results of a tally of points scored by each athlete. Typically the only JV meet that has “official” results is the Championship. This year we got lucky though and had a “regular” season meet scored.  Points are assigned for each finishing position 1st thru 8th. Points awarded for a Relay are evenly divided between all 4 members of that team. Thus the fractional scores some athletes have. Also, in the case of a positional tie, the points for that postion and the next are added together and divided between the tied athletes. This sometimes leads to fractional points.

Coming in first for the Girls is 9th grader Gabrielle Griner with 20 points! Gabrielle’s points disadvantage comes from only doing one event. Doing it well though, means 10 points for a win … and she had two. Gabrielle is the 3 time JV Champion in the Polevault.

Third was 8th grader Lauryn Hall. Lauryn scored a 2nd at the Championship and was on TWO winning relay teams!

First for the boys, 9th grader Jake Russell  showed his versatility. He had a win, a 2nd, a 3rd and was on a points scoring relay team. Jake is also our top scoring JV Track & Field Athlete! Jake was this years JV Champion in the 1600m.

Coming in second for the boys is 9th grader Darryl Bowden. Darryl also had a win to go with his 3rd, 5th place finishes. He was also on a points scoring relay team. Jake was this year’s JV Champion in the Long Jump.

Third was 9th grader Chase Parker. Chase scored a 2nd in the 100m dash and was on two points scoring Relay Teams.