The weather delayed, 2014 Indoor State Track Championships has been completed and our athletes had a good showing. 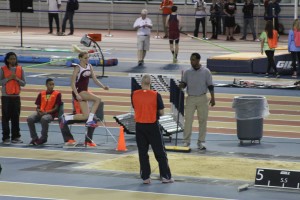 Jr – Rob Russell improved his personal best in the Men’s Pole Vault with a NEW PR jump of 11 feet 6 inches.
This ties the Sparkman indoor record! Considering that at this time last year Rob had never tried Pole Vaulting, things are looking good.
(click here to see video of his vaults.)

Freshman Gabrielle Griner set a NEW Sparkman Indoor Record for the Girls Pole Vault with a jump of 9 feet. This was good enough for a 6th place finish and put the Sparkman Girls into the points.
(click here to see video of her vaults.)
Gabrielle finishes the indoor season as the Top Ranked, Freshman Girls Pole Vaulter in the state and ranked 14th out of all the girl vaulters 1A – 6A.

Freshman Jake Russell was unable to compete in the 800m dash on Monday due to scholastic conflicts but on Tuesday he set a NEW Sparkman Indoor Record in the 1600m with a time of 4:48.12 and finished 19th.
In the High Jump, he was unable to make the opening bar which would have been a new personal best for him but Jake completes the indoor season as the 5th ranked Freshman 800m runner in the state, the third ranked Freshman 1600m runner and the 2nd ranked Freshman High Jumper!