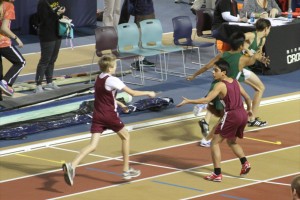 (more photos from this meet on our photo page)

For the girls, new PR’s were turned in for the 400m Dash by
Kaitlyn Williams,
Hailey Brown,
Zariah Trammell,
and Megan Robison, .

For the Boys, Rob Russell, set a new PR in the 60 m Hurdles
and Jake Russell, set THREE new PR’s. One each in the High Jump, the 1600m Run (in which he was within 1 second of a NEW school Indoor Record) and in the 800M Run in which he DID set the New Sparkman’s Men’s Indoor School Record!

Now our athletes will set their sites on preparing for the AHSAA State Indoor 1A-6A Championship at the end of this month.